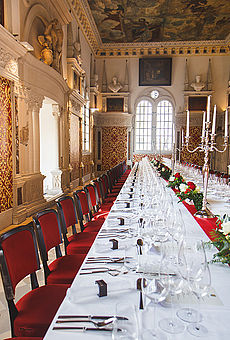 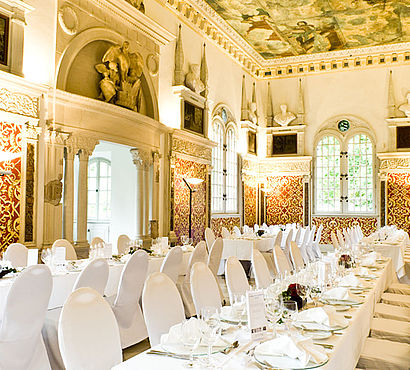 The Tucher castle was built from 1533 to 1544 and was the city castle of Nuremberg’s Patrician family Tucher. After the almost complete destruction of outbuildings during the Second World War, it was rebuilt from 1967 to 1969.

Today, the Tucherschloss museum is owned by the baronial Tucher family of Simmelsdorf and presents the Patrician everyday life and festive culture through the centuries in splendidly furnished rooms.

The rebuilding of the Hirsvogelsaal completes Nuremberg's “Renaissance island”. Before its destruction in World War II, the magnificent interior including the ceiling painting "The Fall of Phaeton" of Dürer’s master student Georg Pencz, had been outsourced and thus could be saved.

After decades of provisional accommodation, the famous ballroom was rebuilt in the garden of the Tucher castle, just a few hundred meters from its original location.